Rule 17: At the Zoo, Animals make you think & People make you angry. 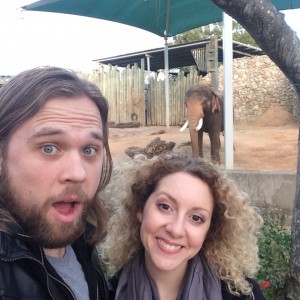 Continuing on our weekend in Houston, my girlfriend and I visited the Houston Zoo today. I already have mixed feelings about Zoos. On the one hand, they are these places that represent every negative aspect of human exploitation of nature and confinement of wild species, but on the other hand, Zoos have taken a large turn towards greatly helping conservation efforts and causes. But, I don’t have to take my big sociopolitical idealistic burdens everywhere I go, so I decided to leave part of those at home today.

My anger began with the parking lot. It took us about 30 minutes to find a spot. Driving around a crowded and gridlocked parking lot will sort of set you up to hate all humans for a short amount of time. It wasn’t the parking lot that really did it for me though, it was the sheer ignorance of the people walking around the Zoo and just ignorantly behaving like buffoons around these peaceful animals. I’ll fast forward to the key moments that I’m really thinking about. 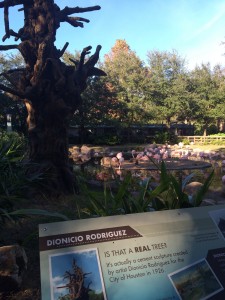 Flamingos and a concrete tree

We were walking by some of the large birds that are housed in the Zoo. They are gorgeous creatures, and observing some of the more uncommon varieties of large birds, you can truly see why they are the modern dinosaur. This guy, he must have been in his forties, kept going up to the edge of the enclosures and snapping loudly at the birds and jabbering loudly at them. He garnered little reaction from the animals, except for the ones that would just turn away and ignore him.

I wanted to stop him and snap in his face, and be like “Hey Hey Hey! Look at me do I have your attention??” And then snap a photo of his face. The reality of acting out that urge though would probably result in a physical altercation and he wasn’t worth the time, so I just asked my girlfriend if we could kind of lag behind and put some distance between us and the idiot snapping and screaming.

As we approached the Tiger’s habitat, thankfully the larger animals don’t have cages these days, I saw him pacing around. Walking up to the edge of the fence and seeing this huge beast pace around his habitat, that is probably 1/100th the size of the habitat his wild counterpart might experience, made me pause. I felt this immediate familiarity in my own life, feeling like I was pacing in a cage. Feeling like there are some things about the confinements of our lives that make us feel captive in our own situations. It’s a maddening and confusing sensation. I can only imagine how that Tiger must feel. Then again, maybe it is just in their nature to pace restlessly around and I’m projecting my own situation and emotions on this animal operating purely on instinct.

My girlfriend has made me realize that I have some intense anxieties that can surface around larger crowds of strangers. Especially when they are loud ignorant people that I would like to yell at. The Chimp and Ape room was the perfect example of an area that I should not regularly visit on busy crowded days. The Chimps were totally laid out trying to nap and there was just a swarming buzzing crowd of people banging on the glass, pointing and laughing at the animals grooming habits, yelling at the animals to get them to look at them for a picture. I could expect this kind of behavior in the kids at the Zoo, but what was mind boggling is the kids were more respectful than their adult counterparts. It was like a real life South Park episode.

It was cold toward the end of our Zoo visit, so we decided to take a pit stop in this little exhibit that had Sea Otters and other small mammals inside a warm building. We were thoroughly enjoying our time with a few other people watching the sea otters jump in the water and swim around with each other. We half jokingly talked about the reality of owning a sea otter as a pet.

Then this gaggle of a family walked in ten strong, loudly yelling at one another. The two oldest men of the group, both looked like they just walked out of a douchey night club, walked right past us up to the glass where the sea otters were swimming and started freaking tapping on the glass. Immediately, the sea otters dashed out of the water and up into the rocky hiding area of the enclosure. Surprise, surprise. So, one of the persistent guys decided it would be a great idea to open hand smack the glass to try and get the animals to come back. I just—sometimes I don’t understand how humans became the apex predator when some of us are this idiotic. 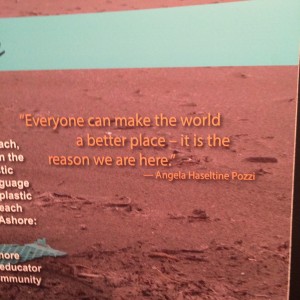 As we were walking on the last leg of our visit to the Zoo, we were approaching the Elephants. My girlfriend and I had been talking about how strange it was how all of these animals had evolved into this perfect combination of roles to benefit their environment. Their bodies, diets, and social structures all coalesced to make their habitat harmonize together to create a cycle of life. Then, I saw a Zoo staff member collecting trash and I was like, oh yeah then there’s us. Where the hell do we fit into nature?

I posed this question to my girlfriend, and she snapped right back, “We don’t…” I’m not totally sure how I view the evolution of man, but I will say that we don’t have a real clear place in the harmonious balance of this planet. So, are we here to observe, improve, and help? Or, are we here to exploit, degrade, and destroy?

I hope it’s the former. But, I’m not convinced.