Rule 40: Let your love be truthful, gentle, and healing…never obsessive and controlling.

In all honesty, this rule was born out of a mixture of a Gandhi quote and my own impression of the movie “Carol”. However, it’s also a lesson that I have learned throughout the process of being able to embrace “self-love” and what a real healthy adult relationship should actually look like.

The Gandhi quote that I am referring to is “Be truthful, gentle, and fearless…” That quote happens to be printed on a magnet that hangs on our refrigerator. It is my girlfriends magnet, but it caught my eye the first time that I saw the magnet at her old place.

I had never read it before then, which was the first thing that surprised me. The second thing was how disorienting those words “gentle” and “fearless” were when placed right next to one another. Not that someone couldn’t be both of those things simultaneously. It’s more that, for me personally, you don’t expect to see those two words together very often. And, when you do, it has a marked impact on your brain. 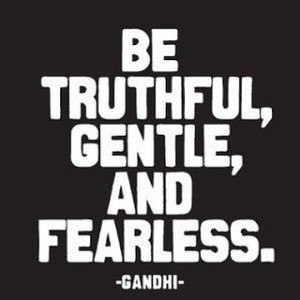 My only dissatisfaction is that I have yet to find out the true origin of this quote. There are plenty of people with a lot to say on what the quote means to them, but very little on where it came from. It may be a daft oversight on my part, but if you know where this quote came from and have a credible source please include it in the comments below.

So, why didn’t I include fearless in this rule?

I think from my own experience, fear is the opposite of love, so I think being fearless in love would require it’s own rule altogether.

Additionally, as I have matured and gotten better at this whole “being an adult” thing, I have realized that real love for another human being means that you encourage their healing and growth at every moment you can. We are all healing from something, so why not make that a routine practice of the love we are getting and giving?

How does the movie Carol fit into all of this?

I don’t want to spoil any of the film so I will sum it up by saying:

Every male character in that film was driven by an obsession to control their female counterparts in every way possible. It was so overwhelming that I felt offended by it. And, I’m not very easy to offend.

The extremes to which the men went to assert their dominance seemed, in a way, almost caricatured or stereotypical. I know that for that time period, this might have been more commonplace. However, that type of stifling control is still very much alive today. Funny thing is, for the most part, those extremes are plainly driven by nothing but fear.

As a guy, I have struggled with obsessions, jealousy, possessiveness, and a need for control in my past. But, asserting the type of dominance that these men did just made me sick. It was a great reminder to never let myself slip into a place of obsession with a partner in any degree. In my view, the minute you try and declare dominance or domain over another human being is the minute you’ve lost any real connection with that person.